If you haven’t experienced the high energy, swamp funky zydeco sound of Chubby Carrier and the Bayou Swamp Band, it is high time that you join the legions of fans that have.

Once the accordion-playing virtuoso grabs the mic and takes to the stage with his band mates, audiences are treated to a show like no other. Chubby’s sound is infectious – a concoction of blues, 70s funk, rock and roll, and good-ole zydeco flavor – and makes even the most timid individuals get their feet a movin’.

Chubby Carrier and the Bayou Swamp Band are turning heads around the world and bringing Louisiana flavor to the masses. The funky zydeco band’s release, “Zydeco Junkie,” earned one of the highest musical accolades when it was named Best Zydeco or Cajun Album during the 53rd annual Grammy Awards celebration in February 2011. 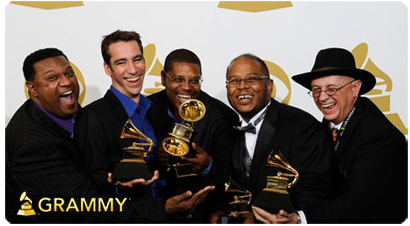 “It was unbelievable ... it was a moment,” Carrier said during a July 2011 interview with The Joplin (Mo.) Globe. “I never thought in a million years that I’d be a part of it. Looking at the names there ... Aretha Franklin, the Beatles, Stevie Wonder ... and knowing, ‘Mister, your name is going to be on this board.’ What an honor and a blessing.

“It’s like I went to the Super Bowl and won a trophy.

In addition to the coveted Grammy, the band was honored with OffBeat magazine’s Best of the Beat award when it named “Zydeco Junkie” as the Best Zydeco Album. Furthermore, the 2011 Big Easy Music Awards awarded the group for Best Zydeco. For Carrier’s accomplishments as a musician and humanitarian, the band was awarded keys to the city from Lake Charles, Opelousas, and Lafayette.

To add to its growing presence outside Cajun country, the video of “Zydeco Junkie” is currently posted on MTV.com.

Carrier is a prince in zydeco royalty. His father, Roy Carrier; his grandfather, Warren Carrier, and his cousins, Bebe and Calvin Carrier, are considered zydeco legends. For more than 20 years, Chubby and the Bayou Swamp Band have toured relentlessly around the world, playing venues such as the Chicago Blues Festival, New Orleans Jazz and Heritage Festival, Cajun and Zydeco Festival in Fort Lauderdale, Fla., and Montreaux Jazz Fest in Switzerland. For his steadfast dedication to zydeco music, Carrier was inducted into the Louisiana Music Hall of Fame on October 16, 2011.

Chubby Carrier, a Church Pointe, La., native, has taken on several causes that are dear to him, including children’s causes, education, and advocating a smoke-free environment. The band is an ardent supporter of the Boys & Girls Clubs of Acadiana, as they have held concert fundraisers to benefit the nonprofit organization. The most-recent benefit, Zydeco For a Good Cause, raised money for the Opelousas unit. In an effort to spread zydeco music to the younger generations, Carrier and the gang teamed up with the Acadiana Symphony & Conservatory of Music to provide students with zydeco lessons. The project, Zydeco from A-Z, boosted participants’ understanding of zydeco music. Through Carrier’s inviting instruction, students learned about the rich history of the genre, the types of instruments used in zydeco such as the accordion, the rub board and the fiddle.

Of all the causes that Carrier endorses, his urge for a smoke-free environment is a personal one. In May 2010, his father, Roy Carrier, died from lung cancer. Carrier, along with Lafayette musicians David Egan, Joey Richard, Carol Fran, among others, has become a vocal spokesman for the Let’s Be Totally Clear campaign. The Bayou Swamp Band front man has made several media appearances to show his support for smoke-free venues in Lafayette and around Louisiana and for individuals to adopt a tobacco-free lifestyle.

The band has also participated in several local events that are aimed at increasing tourism in the Acadiana region. In addition, Carrier is featured in two documentaries, “Zydeco Breakfast (yet to be released),” which tells the story of zydeco music and the culture of French Louisiana; and “Hurricane on the Bayou (2006),” a detailed account of the damage Hurricane Katrina brought to New Orleans in 2005. Carrier is one of the main characters in the IMAX Film.

Chubby Carrier and the Bayou Swamp Band will always have a place in the annals of French music history. With Carrier’s unmatched sound, the group will continue to grow as Louisianans and the world come to appreciate the beats of the ensemble. Zydeco is more than a calling for Carrier. His love for the music is etched in his pedigree. While winning a Grammy is the tip of the iceberg for Chubby and the band, now is the time for all to know to learn about the zydeco culture and Chubby Carrier and the Bayou Swamp Band.